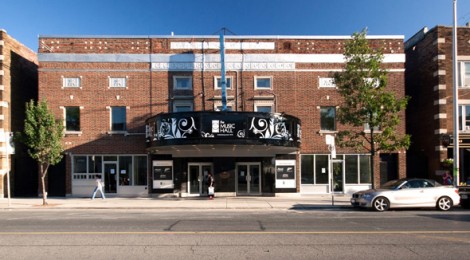 Description
Danforth Music Hall is a theatre-turned-music hall located on The Danforth in Toronto. Noted for its tumultuous history with shutting down and reopening on several occasions, the Music Hall has been recognized for playing movies and hosting famous acts since its opening in 1919. By strolling on the Danforth, it’s an easily recognizable site of the Danforth and is difficult to miss. It celebrated its most recent grand reopening on December 1st, 2011, and since then its inception in 1919, they’ve hosted acts including James Brown, Rihanna and Arcade Fire (Dickison). Its evolution from a theatre to a music hall demonstrates and echoes the intimate setting of a theatre, holding only 1,500 people, towards the setting of the concerts it holds today.

History
Danforth Music Hall first began as Allen’s Danforth 1919. Brothers Jules and Jay Allen, sons of successful of shopkeepers in Pennsylvania, set to find sites to build theatres in prime locations in Canada. After touring Southern Ontario, they enlisted Detroit architect C. Howard Crane, to help design theatres in large Canadian cities, beginning with Brantford in November 1906 (Moore “Allen Theatres”). Crane and his team of architects designed the spaces “to provide “artistic and comfortable surroundings” where distracting interior decorations were carefully eliminated”, being careful to avoid the recurring theme of highly ornamented theatres in the 1910s (“History of the Danforth”; Dombowsky).

Figure 1. An advertisement in the Toronto Star about Allen’s Danforth’s opening and the movie airing at the opening.

The construction boom grew on the Danforth due to the upcoming opening of the Bloor Viaduct Bridge over the Don Valley, connecting Danforth Avenue to Bloor Street, with the capacity to connect the Danforth to the rest of Toronto. Once stories circulated that an opening of another theatre was imminent, the managers of three smaller theatres protested against the opening of Allen’s despite being far away enough to avoid competition (Moore “90 Years”). On August 18th, 1919, Allen’s Danforth, Canada’s First Super-Suburban Photoplay Palace, officially opened showcasing its first film, Through the Wrong Door. Figure 2. From the City of Toronto Archives, this is a photo showing Allen’s Danforth in 1919, the year of its opening.

Paramount pictures, another large theatre company, sought to buy out Allen’s Danforth, and the Allen brothers refused; however, in 1923, they filed for bankruptcy and were forced to close. They ended up being bought out by B&F Theatres, a branch of Famous Players, which changed its name to Century Theatre in 1934 (Veillette). Figure 3. Changing of the signs: from Allen’s Danforth to Century Theatre.

By the 1970s, it was renamed the Titania in 1970, catering to the growing Greek demographic in the Danforth area, playing films and live music videos. As surrounding theatres showed films, the Titania followed suit and went on to change the theatres name, once again, to the Music Hall, reopening in July 1979 and lasting though the late 1990s (Moore “90 Years”; Veillette). Its growth and contribution to Toronto culture led the Music Hall to being inducted into the Ontario Heritage Act in 1985. Unfortunately, as the years progressed, little maintenance was taken on the buildings and it fell into a state of disrepair, to the point where patrons would strategically select seats to avoid water drips from the ceiling (Veillette). As a result, they closed in 2004. Figure 4. A plaque given to Allen’s Danforth Theatre from the Riverdale Historical Society celebrating the theatre’s 90th anniversary.

A year and a half, renovations began as Ellipsis Leisure Retail Inc. took over the building, with Glyn Laverick as CEO of the Music Hall (Morrow). Important to maintaining its true nature as a music hall, new sound systems were installed. The recognizable Danforth icon was alive again. On August 18th, 2009, the theatre celebrated its 90th anniversary by playing the first film ever shown and further, Heritage Toronto and the Riverdale Historical Society presented a plaque “to recognize the building’s cultural and architectural significance to not only the local neighbourhood, but also the rest of the city and the country” (Milley).

One year after celebrating its 90th anniversary, Electra Films Limited evicted its tenant, Ellipsis Leisure Retail Inc., as a result of being $44,857.86 behind in rent (Milley; Morrow). For about a year, the space was used for the occasional show before Impresario Inc. bought the space out and reopened on December 1st, 2011. Michael Sherman, lead partner of Impresario, aims to have 100-150 shows per year. They began with a strategic “soft-launch” before a large-scale unveiling, kicking off the first day of opening with a performance by The Musical Box. Although Sherman’s team added new bars, carpet, and coat check area the current Danforth Music Hall still reflects the heritage and age of the original Crane architecture. To improve performances, state-of-the-art lighting system, audio equipment, and brand-new audience seating was installed (Gheciu).

An Analysis of Sound and Music at Danforth Music Hall
As mentioned earlier, the architectural design of the space was and still is important to experiences in the space. The architectural company, headed by C. Howard Crane, designed the space to create an artistic and comfortable space, avoiding distracting interior decorations, unlike the theatres of that day, which featured distracting ornaments (“History of the Danforth”).

Schafer says, “the contemporary soundscape is notable for its dynamic hedonism”, which can be said for the Danforth Music Hall. The way in which audiences absorb and enjoy performances is highly dependent on the environment in which the music is being performed. Despite Danforth Music Hall being an aged building, it shows that the evolution of the intimate setting is important to the consumption of music and creating experiences with the performance. The evolution of the acoustic environment shows the trends and evolution of the society surrounding the space (Schafer 7). In its early beginnings in 1919, the space was used strictly for cinema, but then evolved into a Music Hall based on popularity of surrounding theatres and how the evolution and modernization of theatre and evolving theatre space into a space of performances. In comparing Danforth Music Hall to the Cineplex Odeon chain demonstrates the value put into early theatres in contrast to the consumer-oriented cinema today. Figure 5. A view of the seating in Danforth Music Hall as of 2013. The open flooring has options of inserting or taking out seats, depending on the performance. Otherwise, it remains seatless. Further, the architectural design of the space can be seen here through the wide frame.

Cineplex hosts various screens, but Danforth Music Hall has one, seating a total of 1,500 people. Amassing a large amount of people into one space is also another manner of experiencing music – you’re in a space with people who share the same musical interests as you. Not only that, in comparison to arena’s that seats thousands, a space of 1,500 provides an intimate setting, especially between the performer and the audience member. Small perfectly states that “we need to look as well as listen around us during a performance, to find out what relationships are being generated in the performance space” while musicking (14). Differences in how music is experience in a setting as small as the Danforth Music Hall in comparison to a space such as the Air Canada Centre can be demonstrated in the picture below. The photo comes from Rihanna’s 777 Tour, which hit Toronto on November 16th, 2012. Because the venue has a small capacity, you can be far away from the performer, but because of the space of the hall, it doesn’t feel like you’re far at all. Does the music of the performer benefit from a smaller and more intimate venue?

The 1,500-capacity venue is similar to LaBelle’s discussion on the evolution of the car as a private space to experience music at whatever volume, bass or treble setting of your liking. Although, in a car, the listener has full discretion on what music to play and is in control of the acoustics, in comparison to the Danforth Music Hall where the idea of private space is similar, but the auditory control isn’t. The structural design of the Danforth Music Hall contributes to its auditory traits to this day, even with the inclusion of new sound systems. In a blog post in November 2013, on Venue Diary, the author states:

Beautiful architecture and a well-designed sound space combine for a unique concert-going experience. The Danforth is a smaller venue with a capacity of 1,500 allowing for a very personal experience. The venue also has sloped floors that really should come standard in concert halls, allowing for a great view…The show felt so intimate … This gave off a unique show experience, feeling like no one else was in the room- just me and the music.

LaBelle describes the car as a “special space that affords the listening body a private relation to music,” and this in turn can be applied to the Danforth Music Hall. In thinking about the car, it’s a private space that seats up to 8 people, depending on the type of vehicle you have. The larger it is, the more potential it has to be louder and less intimate with more people. This can similarly be applied to a music venue. The larger it is (for example, the Air Canada Centre), the more potential it has to be less intimate in the way you experience music in that space because the distance between you and the performer is large, including if you have standing seats because there are thousands of other people vying for attention. The smaller it is (for example, the Danforth Music Hall), the more potential it has to be more intimate. In a small setting, the music can be enjoyed and as the Venue Diary author stated of their experience, more intimate.

A smaller venue space has the potential of changing the ways in which one experiences music. A smaller venue, including contributions from its architectural design, contributes to the way wherein that particular space can be considered a private space. Even though the Danforth Music Hall space is at 1,500, it’s a relatively small number for a concert venue, giving it the potential of becoming a private space and changing the ways in which music is consumed in a setting as minute in comparison to the Air Canada Centre. With a new owner that values the intimate setting of the space and architecture of the Music Hall, it’s exciting to see the future of musicking and the evolution of spaces that create intimate musical experiences. Figure 6. Rihanna’s 777 Tour in Toronto at the Danforth Music Hall. November 16, 2012. The photo shows the intimate setting of the venue from the balcony.